Food on the brain

B. has lived where he lives all his life. I can't really blame him, he has a house with no visible neighbours, 2 miles from the nearest village, and surrounded by fields (which mostly belong to his dad's farm). His dad has lived in the farmhouse all his life too, and before that, his parents lived there. During the war, they had a few PoW's working on their farm, and one of them, an Italian, stayed nearby, eventually buying his own farm. He has known B. all his life and we often go and see him. He's almost 90 now, lives on his own (although his children live close by) and does everything himself. Every time we go there, he has changed another room, installed a shower, made a new window... We went to visit him last Sunday and when we asked him how he was, he responded with 'not enough hours in the day'. I hope I can grow old like that.
His garden is a huge vegetable plot, and as soon as you turn up, he goes to his kitchen, grabs a handful of plastic carrier bags and drags you out to the garden. This time, it was gooseberries, potatoes, courgettes, the most delicious French beans I have ever tasted, and tomatoes. The tomatoes were so beautiful, it was almost a shame to eat them: 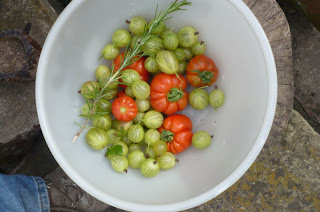 We ended up with 2 kgs of very ripe gooseberries, so on Monday I took the plunge and made jam. I had never made jam before and was a bit nervous about the setting process, but I needn't have - everything went smoothly and I'm now the proud owner of these 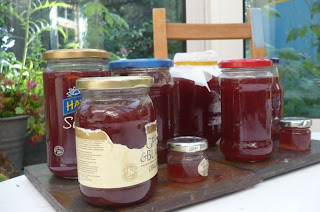 Yes I must get some nice labels!

Last year we bought some wetsuits when we were camping in Cornwall. I know they're meant to be tight fitting, but mine was extremely tight. I had a feeling I'd put on a bit of weight since last year, well according to my bathroom scales I had, so last Sunday I tried the wetsuit on again and uhm, it was *really* tight. Five years ago I managed to lose almost 2 1/2 stone with WeightWatchers and most of the time I still follow their principles, but I do like my food and an icecream or Chinese takeaway will be enjoyed occasionally! When I bent forward to pick something up off the floor and I heard 'crack' and my wetsuit had ripped, I knew it was time to do something about it. So on Monday morning I looked up meetings, found one that was on that morning, and signed up again, thinking I had about a stone to lose. Imagine my surprise when I stood on the scales and found I was only 4 1/2 lbs over my goal weight! Small problem, you can only sign up if you have 5 lbs or more to lose, so I lowered my goal weight a bit - but to be honest, once those 4 1/2 lbs have shifted, I'm happy. I'm glad I signed up again, it's made me feel more in control and I hope it won't be too long before I'm back to a weight that makes me feel happier. Wish me luck!
Posted by Cybèle at 5:59 PM 4 comments:

Instead of going through the normal kids' bedtime routine of bath, story and bed, and then having some time to myself, I have been banished from the living room to my bedroom. I. has a friend over to stay and they're watching Mamma Mia on DVD. I was allowed to make them a big bowl of popcorn, I made them a jug of drink and then I was expected to leave.

So now I'm sitting on my bed, I've surrounded myself with my laptop, knitting, books from our library visit today and my wallet for a few internet purchases.

The other topsy turvy thing is that I would actually quite like to go to sleep, having had a ridiculously busy week, but those two girls want to stay up as late as possible of course.
I'm sure tonight will be the first of many...
Posted by Cybèle at 9:53 PM 3 comments:

For the past few years we've taken our VW camper to Vanfest, which is the biggest VW camper festival in the UK, held at the Three Counties Showground in Malvern. Last year we felt it was getting a bit big and commercial and anonymous - we had real trouble finding a spot to camp in, let alone a nice spot, we barely spoke to anyone as there were so many people and we just fancied a change. So this year we went to CamperJam in Shropshire, which was first held last year, so much smaller.
The surroundings were lovely, the grounds of Weston Park, and we had a great spot 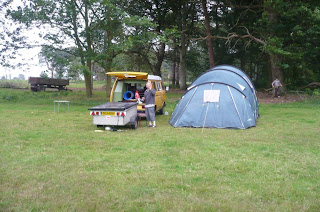 but now that we've done three camper festivals, we feel we've done them really. They're all a bit the same - a line-up of shiny campers (or deliberately rusty ones, the so called rat look), the stalls selling VW accessories or anything else that they think festival goers will buy, the beer tent, the stalls with rusty old parts (and we do rummage through those as we want a period cover for the interior light), some entertainment (even the band is the same at all the festivals!), and the stalls selling food. The food stalls this year were all together in a square with picnic tables in the middle, which worked really well - we found a nice quiet table on Saturday to have lunch at, and the food was very good, so were the milkshakes with every flavour you can imagine.
But what we like best about these weekends, is just being away, discovering a new part of Britain, having a barbecue in the evening and sleeping in the tent. 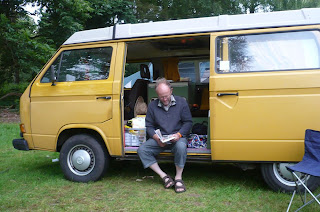 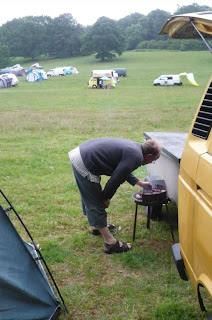 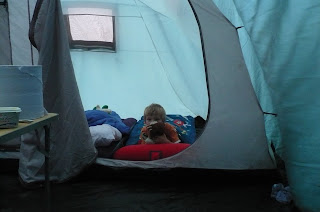 And if you turn up at a campsite and there is another VW camper parked there, that is fun - you go over and have a chat, sometimes a drink together. If there are 1500 or 2000 people who all own a VW camper, it's not quite so exciting to bump into a fellow owner. 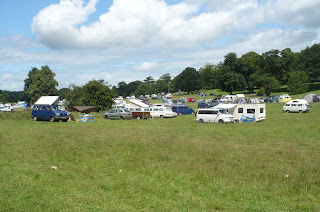 We left on Sunday at lunchtime and as we were so close, we made a short detour to Ironbridge, where the first cast-iron bridge of Britain is. 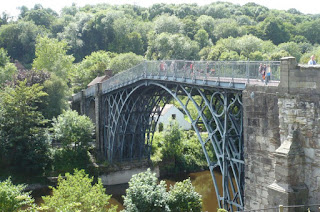 Lovely little place, yes lots of tourists but still worth a visit, the museum was small but interesting, the sun was shining and on the way home, we suddenly came across another little iron bridge. 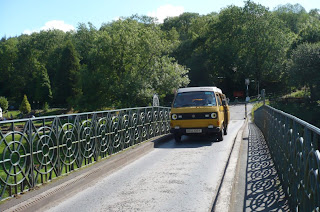 I felt as if we were on a proper holiday. Next year, we're just going to go away for a long weekend before the main holidays and explore a bit more in Britain. Not in the west though. It always seems to rain in the west...
Posted by Cybèle at 9:33 AM 4 comments: