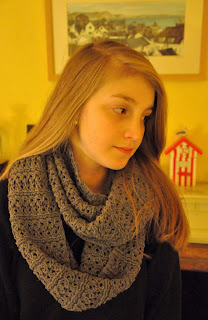 Back at the end of December, I said on here and on Facebook that I would make 2013 the year that I would only knit for myself. A month in and it has been hard! I keep seeing projects that the children would like, specially 13yo who has discovered I can knit her things she likes, but also 10yo who loves cuddly animals (in fact, I may have to make an exception come Christmas time, as he gets a knitted animal from me every year).

This cowl was meant to be a Christmas present but I just ran out of time. I'm quite glad I didn't try and get it done for Christmas as I cast on on the ferry on 30 December and cast off three weeks later! Anyway, as it was meant to be done in 2012, I figured it didn't break my resolution.
The pattern is called the Stockholm Scarf and is free through Ravelry. It took me a few rows to get my head around the stitch pattern but it is a very clever reversible mock cable with only 4 pattern rows. Once I understood it, it was very easy and relaxing knitting. I used a cotton/acrylic blend as I didn't want it to be scratchy at all, but this has also made it heavier than if I'd used wool or a wool blend and so it is stretching a bit. That could also have something to do with the fact that she has been wearing it constantly - in fact, when I'd finished it and she put it on, she said 'it is perfect, it is exactly how I imagined it to be!' and my resolve to knit only for myself weakened once again...

Right now I'm crocheting a little present for a friend who gave birth to a longed-for baby girl a couple of weeks ago. I had promised to get something on the needles as soon as she told us she was expecting, so again I don't think this breaks my resolution. I'm making a size 6-12 months and can't believe how small it is. It shouldn't take long to finish and once that's done, I am casting on a cardigan for myself. All.For.Me.